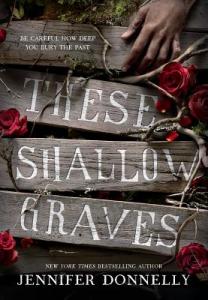 by Jennifer Donnelly
First sentence: “Josephine Montfort stared at the newly mounded grave in front of her and at the wooden cross marking it.”
Support your local independent bookstore: buy it there!
Content: There’s some mild swearing, murder, and some questionable situations. It’s in the Teen (grades 9+) section of the bookstore, but I’d give it to a 7th or 8th grader, who was interested.

Josephine is a thing that an 1890s socialite isn’t supposed to be: curious. She’s supposed to obey her parents, be elegant and ladylike, and marry a wealthy, eligible bachelor of her parent’s choosing. But, when her father unexpectedly turns up dead, supposedly having shot himself, Josephine won’t — can’t — settle for that. She heads out, teaming up with a reporter by the name of Eddie Gallagher, to find the Truth.

Thus starts a winding, sometimes scary, path that will lead Josephine down paths that would scandalize her family if they knew, but ultimately opens Josephine’s eyes and changes her forever.

I’ll be honest: the mystery was kind of predictable. I guess who it was fairly early on, as well as guessing the “big secret”. I didn’t have the how and why, but eventually, I figured out that too. The thing that kept me reading was Jo herself. I enjoyed the push and pull she had with Upper Crust New York Society, how she was willing to go against the expectations of her family. I found it all fascinating, and found Jo a character worth spending time with this.

Which made it worth reading.

One thought on “These Shallow Graves”