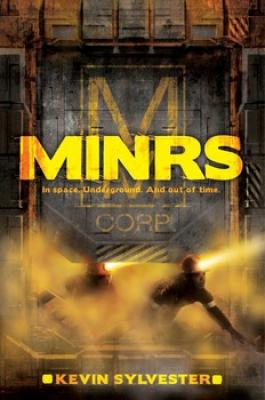 by Kevin Sylvester
First sentence: “The Earth blinked, and was gone.”
Support your local independent bookstore: buy it there!
Content: There’s a lot of death, some of it a little graphic, especially in the beginning. I’d give it to an advanced 4th grader and up, as long as they were okay with the violence.

It’s a future where the people of the world were going to die from an asteroid hit, until a brilliant scientist, Harold Melman, figures out how to nudge it away. And then, the ice melts and they discover that there’s a ton of resources — ones that the Earth is running out of — to be had. So, Melman Mining Corp sends families up to inhabit the asteroid, to mine the minerals and ore, and ship it back to earth.

Fast forward several years later. A Blackout is coming — the asteroid and the Earth will be on opposite sides of the sun and there won’t be any communication possible. And in the middle of this, the mining colony is attacked. Brutally bombed. Everyone killed except for Christopher Nichols and a few other kids. No one (read: the bombers) knows they’re alive. And so, they not only have to figure out how to stop those responsible for the bombs, but keep themselves alive. (In more ways than one.)

This was a trip and a half. It’s a good adventure novel: figuring out how to survive in the mines, the internal conflict between those who just want to survive and those who want to attack, and the inevitable betrayal. It’s a unique premise (for the most part; I have read other kill all the adults and make the kids survive books this year) with the future and science. And even with the love triangle (of sorts), it was a good science fiction book.

My only real complaint is that I was hoping for a stand-alone, and while the conflict mostly resolves, there’s a pretty big cliff hanger that sets up at least a sequel. Other than that, though, it’s spot on.