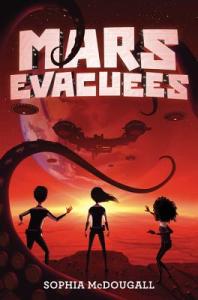 by Sophia McDougall
First sentence: “When the polar ice advanced as far as Nottingham, my school was closed and I was evacuated to Mars.”
Support your local independent bookstore: buy it there!
Content: There’s several mild swear words and some violence (including bullying). It would be in the middle grade (grades 3-5) section of the bookstore.

It’s sometime in the future, and the Earth has shared its home with an alien species, the Morrors. The problem? The Morrors are changing the nature of the earth, freezing it over, and that’s got the humans mad. So, they started waging war against the Morrors, trying to kick them out. But it’s not working, mostly because they’re invisible to the human eye.

So, the humans are resorting to evacuating a select group of kids to Mars to train for combat. Alice Dare, whose mother is a star fighter pilot in this war, is one of those kids.

At first, it seems to be like any other boarding school: there are bullies, and Alice makes some friends — another English girl named Josephine and an annoying boy named Carl and his younger brother Noel — and everything seems to be going okay. Then, one day, all the adults disappear.

Most of the school goes haywire, but Josephine and Alice (along with Carl, Noel, and their robot teacher Goldfish) decide that what they really need to do is go find the adults. What they end up finding is a whole lot of trouble.

Oh. My. Gosh. I know the summary didn’t do this justice because it was the most awesome I’ve read in a long time. It’s smart, it’s funny, there’s fantastic characters, it’s packed with adventure, it’s diverse. It kept me hooked from page one through the conclusion. (And while there’s a sequel, this one stands on its own.) It was just so. much. fun.  Seriously.