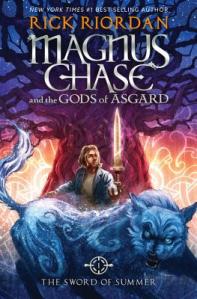 by Rick Riordan
First sentence: “Yeah, I know.”
Support your local independent bookstore: buy it there!
Content: There’s really nothing objectionable. Some violence (lots of death, mostly) and some more serious underlying issues. I’d give it to a 4/5th grader. I’m undecided about where it should go. It’s currently in middle grade (grades 3-5) with the Percy Jackson series, but I’m thinking about moving it to YA (grades 6-8).

Magnus Chase is a 16-year-old homeless kid (he’s been homeless for the past two years since his mom was murdered) when he discovers that he’s not who he thought he was. He is, in fact, the son of the Norse god, Frey, and he’s been targeted by all of Frey’s enemies. In fact, he loses his first battle and ends up dead, in Valhalla. From there he realizes that he can’t let something as insignificant as death stop him: he needs to find the sword of summer and stop the evil forces from rising. The question is, though, can he do it?

First off, plot and everything else aside, I am SO happy the sassy chapter titles are back! Seriously, I have missed those.

In fact, Magnus’s voice is eerily similar to that of Percy in the first series. No, it’s not as good as PJ and the Olympians, but it’s the closest thing to it since Riordan wrote The Last Olympian. It’s sprawling and meandering and I think that Riordan’s cramming way too much in there (but then again, doesn’t he always?). But the characters are fascinating and aside from the “deaf and dumb” moniker (which Abby called him out on) for one of the characters who was deaf, it was wonderfully, naturally diverse. Sam, the Muslim Valkyrie, is one of my favorite characters. It’s nice to see Riordan being inclusive.

Oh, and Annabeth is in it! (Yes, that Annabeth.) You don’t have to read any of Riordan’s other books to enjoy this one, but there’s always some nice asides (like how a pen turning into a sword is lame) for those of us who have.