by Stephanie Tromly
First sentence: “Of course I didn’t like Digby when I first met him.”
Support your local independent bookstore: buy it there!
Release date: August 4, 2015
Review copy provided by the publisher rep.
Content: There’s some mild swearing. And inferences about drug use by teens. I think it’ll be in the YA section (grades 6-8) though. (It’s not too bad.)

Zoe is the product of a bad divorce: her Wall Street broker dad cheating on her mom. She generally sided with her dad, but ended up in her mom’s custody, moving to a small podunky college town in upstate New York after the divorce. Zoe doesn’t want to be there at all and when Digby — kind of the high school pariah, of sorts — decides that she needs to be his side-kick (she really doesn’t have much say in it; he really just inserts himself into her life and she doesn’t kick him out) in discovering what has happened to a local kidnapped teenager, she goes along with it. For kicks and giggles.

When the ARC came into the store, it had this sticker on it: 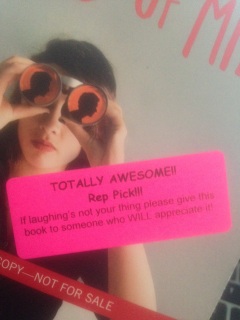 I won’t say it gave me high hopes, but I was expecting some laughs. And there were: Digby has a talent for getting into some very bad situations, and there was some pretty amusing antics trying to get out of them. And Zoe’s mom with her bumbling cluelessness was pretty amusing too. (Though: not as amusing as the mom in Finding Audrey.) But while I didn’t find it funny, I did find it endearingly charming. Incredibly charming. And fascinating. There’s a mystery running throughout — and not just the finding the kidnapped teenager one — that kept my interest, and kept me guessing, which added to my general enjoyment. And I just adored Zoe and Digby and their friend Henry. And all the other people they came into contact with. It was just… delightful.

So, maybe it’s not the hilarious read our rep promised. But it’s still definitely worth the time to read it.