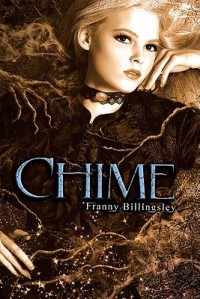 by Franny Billingsley
ages: 14+
First sentence: “I’ve confessed to everything and I’d like to be hanged.”
Support your local independent bookstore: buy it there!

If I were being totally honest, I’d say that this book didn’t grab me from the beginning. I would admit to being completely confused for about the first third of the book, struggling with it, but still mesmerized by the way Billingsley was telling the story. It was tantalizing in its potential, which kept me going.

In the Swampsea there are two kinds of people: those who can see the Old Ones — the spirits of nature and the monsters — and those who can’t. Generally speaking, those who can see the Old Ones are witches. Sure, there’s the Chime Child, a person who is born on the stroke of midnight and whose purpose is to sit in on the trials of the witches, who can see the Old Ones. But no one else. So, that must mean that Briony Larken, who can, is a witch. At least, that’s what Stepmother always said. There’s even proof: Briony called up the wind, which made her twin sister Rose fall and that’s why she’s not completely normal. And Briony called up Mucky Face, the spirit of the river, to injure Stepmother which made her sick, and would have killed her if the arsenic didn’t.

No, Briony isn’t happy. And she can’t love. Not even her sister. Not even her father, who has left his children alone for so long. But then Eldric comes along, bringing with him light, and laughter, and perhaps most importantly, change.

It’s a complex book, as Billingsly peels back the layers of not only the story but also Briony’s psyche. There’s mystery: about Stepmother’s death, about Briony, about Eldric, about Father. That doesn’t even mention the one that Rose carries and drops hints about all through the book. And there’s romance. It’s not a fiery one, full of sparks and swoons, but rather my favorite kind: one where the characters start slowly, are friends first, and then grow into something more.

And the ending? Let me say that I don’t cry easily at books, and this one made me weep.

Very much worth the accolades it’s getting.