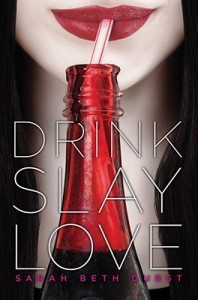 Pearl is a vampire. And she is completely happy. She’s strong, she’s awesome, she’s got a super-hot (immortal) boyfriend, a favorite snack (in the form of a loser boy who works at the local all-night ice cream joint), the approval of her Family, and she’s about to go through the Fealty Ceremony for vampires. Life is perfect.

And then Pearl is stabbed by a unicorn, which completely throws her for a loop: unicorns are supposed to be mythical, unicorns are NOT supposed to stab vampires, and — most importantly — vampires are not supposed to survive the stabbing. And be able to withstand daylight afterward.

Rather than let it be a deterrent to their plans, Pearl’s Family decides that what she needs to do is go to high school, and lure all those lovely, tasty humans to their doom in order to supply the feast for the King of New England at the Fealty Ceremony.

One of the best things about this book — aside from the swoonworthiness of Evan, a human guy whom Pearl falls in with (though I called the ending about halfway through) — is that Durst is plainly making fun of all the vampire books out there, even as she’s telling a vampire story. There are laugh-out-loud moments, moments in which you have to grin as she pokes fun at vampires, Twilight, and girls who swoon over the whole vampire thing. But, even aside from that, Durst’s telling an interesting story here, exploring ideas of change and reform and self-identity, as well as interfering in people’s lives (or whatever passes for a life if you’re undead). Sure, it’s a romance, and it’s fun, but at it’s core, it’s telling a story of a girl trying to figure out who she is in the face of a drastic change.

And that’s someone everyone can relate to.