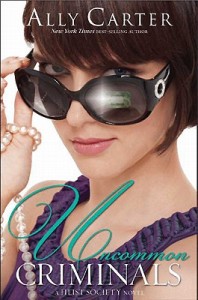 by Ally Carter
ages: 12+
First sentence: “Moscow can be a cold, hard place in winter.”
Support your local independent bookstore: buy it there!

This book, as pointed out by Liz B., can be summed up in three sentences: It’s fluff. But it’s such fun fluff. And no one does fluff as well as Ally Carter.

The other best way to sell it (and Heist Society, the first one in the series)? It’s Oceans 11 for teens. In book form.

After pulling off the heist of the century (which I suppose is a bit of a spoiler for the first book. Sorry), Kat and crew have basically gone their separate ways. Kat’s taken on a personal mission for good, taking jobs stealing back paintings stolen by Nazis in World War II. Hale’s constantly upset with her because she keeps shutting him out. Gabby’s gone her own way, and Uncle Eddie’s moved to Paraguay (or was it Uruguay? That’s a running gag.) to run a sting for the family. So, when Kat is propositioned to steal the Cleopatra diamond for what is ostensibly a good cause, she doesn’t hesitate.

Then things get deliciously complicated.

Honestly? The best thing about this book (aside from Hale’s swoonworthiness; I really shouldn’t have crushes on 17 year old fictional boys. Not healthy.) is that Kat and crew up and go all over the world at a drop of a hat. They’re MINORS! And they get away with so much. It’s hilarious and improbable and fun. Who cares that they’re smart rich kids basically stealing things because they can? (Well, not exactly, but it feels that way at times.) I don’t. I’m along for the ride, and, man, it’s a fun one with an absolutely brilliant twist at the end.

Sometimes, fluff — especially good fluff — is exactly what you need.