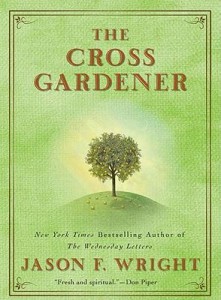 by Jason F. Wright
ages: adult
First sentence: “I was born on the side of a two-lane Virginia highway at 1:21 a.m. on February 1, 1983.”
Support your local independent bookstore: buy it there!

Perhaps it’s best if I’m up front with this one: I didn’t like it. I thought it was sappy, manipulative, blatant and poorly written. I felt like a rat being run through the maze, being prodded which way to turn. And the ending? Unpredictable and kind of, well, lame.

Basic plot: John Bevan, who has suffered lots of loss in his life (first his mom died in a car accident which resulted in his birth; then his grandfather, whom he never met; then his father), loses (why is it always loss and loses for death? We don’t misplace anyone when they die, do we?) his True Love (ugh) and unborn child in a freak car accident. He suffers grief and pain and basically ceases to function until he meets The Cross Gardener, who helps him find The Way Back.

Before I get too snarky, I should admit something: aside from a couple of early-term miscarriages (I didn’t even make it to a D and C) and the deaths of my grandparents at generally advanced ages (my grandmother died when she was 64, but I was only 9, so it didn’t really impact me), I have not had much experience with death. No infant deaths, no spouse deaths, no parent deaths, no sibling deaths. So, I admit, readily, that I had no frame of reference in which to connect with this book. Perhaps if I had experienced some sort of tragic event, some grand loss in my life, I would be better equipped to actually connect with this book.

That said, if it were a better written book, I wouldn’t have had to have shared experience in order to connect with the characters and their experience with grief.

One thought on “The Cross Gardener”