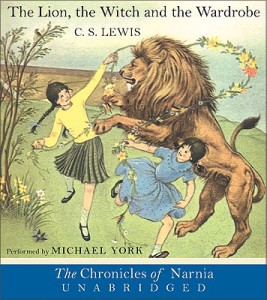 I don’t quite know where to start with this. I read the books for the first time in college, and I think I liked them. Though I’m nowhere near the Lewis devotee as some. (Including Hubby.) I saw the movie, but wasn’t impressed. And, honestly, I didn’t remember much about the story.

But, there had been some talk around the house about the Narnia books, mostly because we’d just watched The Voyage of the Dawn Treader movie. A and K were curious about the stories, so I picked up this one to listen to while we were on the trip.

And, to be thoroughly honest, it didn’t stick with me. Sure, I enjoyed it while I was listening to is, as did A and K. But, two weeks later (there is a reason I put posts up right after I finish things), all I can remember about the story was that it was nice. And that I was surprised at how little the Pevensie kids actually did. Mostly it involved them reacting to events, getting caught up in events and watching events unfold. Very rarely were they actual active participants in the story, which disappointed me.

But the younger girls enjoyed it, and Michael York did an admirable job reading it. And it kept everyone from arguing in the car for a few hours. So it wasn’t really time wasted.

3 thoughts on “Audiobook: The Lion, the Witch and the Wardrobe”