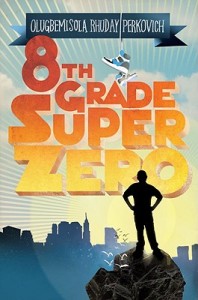 8th Grade Super Zero
by Olugbemisola Rhuday Perkovich
ages: 12+
First sentence: “Everyone know’s what’s up, because it’s the first day of school and I set the tone.”
Support your local independent bookstore: buy it there!

Reginald Garvey McKnight did not start the school year off well. Which means, for this eighth grade year, he’s stuck in loserville because of an unfortunate vomiting incident on the first day of school. Reggie’s content putting his head down and just surviving, even with the constant (nasty) teasing by his former friend Donovan. But then his church youth group does a service project at a local homeless shelter. For many reasons, this moves Reggie, and suddenly what was going to be a low-key year of just surviving becomes something more. And as he gets involved, he finds that he’s becoming something more.

I loved the characters of this one — the ethnic and religious diversity, as well as just their genuine heart — as well as the issues it discussed. It’s very broad: there are issues of homlessness and community responsibility, as well as religion, bullying, race relations, sibling rivalry, as well as a parent that’s unemployed. You wouldn’t think with so much going on that it would work, but it does. Perhaps because it’s a slice of life: the conflict is minimal, though real, and lets Reggie’s inner struggle and questions shine. I also liked how it treated everyone (even the bullies) with respect.

Nathaniel Clark is not a genius. He’ll be the first to tell you that. Sure, he’s 14 and has graduated from college already, and yeah, so he has Asperger Syndrome, but in order to be a “genius”, he needs to have use his talents to make a contribution to the world.

Getting through daily life seems to be quite all he’s able to do, with his math, and the friends he does have — Molly, his bowling partner; Cooper, the boy next door; and Jessa, a friend that Nathaniel wants to be more than a friend — and keeping everything in check, so he can appear “neurotypical.” And that’s not even mentioning his stubbornly obtuse father.

As we follow Nathaniel around, we get to know him and his quirks, how he thinks and feels, and experience the world from his fascinating perspective. We learn about his life through flashbacks (he accesses his memories as computer files and watches them like movies). We experience good times, when he’s doing well, as well as times when he crashes and retreats into N-world, his own safe place.

It’s all very captivating and interesting, but Nathaniel is also more than that: he’s a winning character, a sympathetic person: fascinating and engaging and cheer-worthy.

Decision:
It was difficult to decide between these two books, both of which were fantastically written and captivating to read. But, in the end, I think I’m going to go with Reggie and 8th Grade Super Zero for breaking the mold, for giving us a story of a God-fearing, caring, interesting, black boy, who wants to help and not be shoved into any of the black male stereotypes. That definitely is something to cheer about.

2 thoughts on “Nerds Heart YA, Round 1: 8th Grade Super Zero vs. MindBlind”