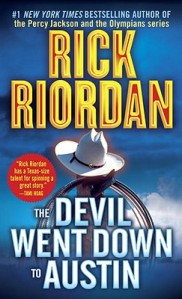 by Rick Riordan
ages: adult
First sentence: “The first time I knew I would kill?”
Support your local independent bookstore: buy it there!

Our erstwhile college professor and PI, Tres Navarre, is off to UT Austin for the summer to teach a class in Medieval English lit. Which means, since he’s not interested in getting an apartment for six weeks, he gets to bunk with his older brother, computer programmer extraordinaire, Garrett.

Except, because it’s Tres, things don’t quite go as smoothly as planned. He ends up going early because he’s found that Garrett’s mortgaged the family ranch to cover costs for his new start-up tech business. Which is failing. Badly. And then, Garrett’s partner and long-time friend, Jimmy, ends up shot dead, and Garrett’s the main suspect. So, it’s up to Tres (well, it’s not, but Tres decides it is) to figure out who, besides his paraplegic older brother, could have done the dirty deed. Throw in a scheming ex-wife, some rich but estranged relatives, and a cutthroat businessman out for blood, and you’ve got some dangerous people to deal with. Not to mention Tres’s ex, a successful corporate lawyer, that he hasn’t seen in two years.

Just like in The Last King of Texas, Riordan piles it on fast and furious. He’s moved the local to Austin, and while he doesn’t have the same affection for that town as he has for San Antonio, he captures the unique flavor of Austin and the UT campus. That said, the town itself takes a backseat to the story, which is all kinds of gripping. It’s an incredibly gritty story, but for different reasons than King was: dealing with domestic issues as well as business ones. Still, Riordan puts the reader through the paces, keeping us guessing as to who the real murderer is. And when the twists come (and they are there), it’s enough to knock you out of your seat. And yet, they are not out of nowhere: the ground has been laid, and it makes perfect sense when they do come, right at the end. But, even with the grittiness and twists and turns, Riordan doesn’t skimp on character: Tres is fleshed out even more, and the relationship he has with his ex is a fascinating, complex one.

I would say I’m finding it hard to believe I’m hooked on these mysteries, but honestly, I’m not. I adore Riordan’s writing. And these definitely qualify as good Riordan writing.