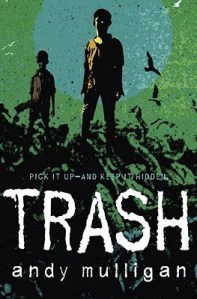 by Andy Mulligan
ages: 13+
First sentence: “My name is Raphael Fernandez and I am a dumpsite boy.”
Support your local independent bookstore: buy it there!

There are very few books that can both break your heart, keep you guessing, and make you cheer at the very same time. This is one of those books.

Set in an unnamed third world country (that, because of the author’s background, I visualized as the Philippines), it’s the story of Raphael, Gardo and Rat, boys who spend their life going through the garbage to find the worthwhile scraps to sell, and the day they found something truly amazing.

It’s just a wallet, but a wallet with enough pesos in it that catches their attention. Plus there’s a key. Raphael and Gardo take it, of course, but what happens after is beyond their control. It involves abusive police, a very corrupt elected official, some innocent bystanders, and solving a puzzle before the authorities get to them (or it) first.

The best word to describe the book is intense. So intense in parts that I had to put it down for a while, take several deep breaths, and cross my fingers and toes that it will all come out okay. Mulligan flips between several narrators: the premise is that they are all telling this story in retrospect, taking turns with the narrative as each has his (and her) own part to play. It shouldn’t have worked as well as it did; the idea of telling things in retrospect means that the end is given away, right? But, it’s not, and it works beautifully, keeping the reader (at least me) on the edge of their seat.

It helps, too, that Raphael, Gardo and Rat are not only likable but worth cheering for. They are up against incredible odds, and their soul and bravery are amazing. It’s also a book that makes you think: about third world countries, about aid, about corruption.