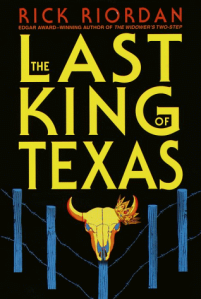 My in-person book group is reading The Red Pyramid for their selection this month. Since I’ve long since devoured everything Riordan’s written for kids, and since I usually include the sentence “he’s also written a mystery series for adults but I’ve never read them” while talking about Riordan, I figured the least I could do is find out what the whole mystery series for adults is about.

Our erstwhile hero is Dr. Jackson Navarre, Ph.D. in Medieval Studies, also known as “Tres” (Spanish for three, not “Tray”; a mistake I was making). Tres is also a private investigator. In fact, that’s the reason he moved back to San Antonio, after years in the Bay Area. He’s offered a position at UTSA, in part because of his P.I. job: the man who had the position right before Tres ended up being shot to death in his house, after receiving several death threats via letter. Then, in the middle of the interview, a pipe bomb is delivered, exploding shortly thereafter. Of course Tres takes the job. It’s a series of twists and turns from there, as we explore the gritty underbelly of 1990s San Antonio. This is the third in the series (the first published in hardback, and the first my library has. I love Riordan, but not enough to hunt down the first two Tres Navarre books), but works just fine as an introduction to the world of Tres. There are a lot of characters to juggle, but Riordan manages that beautifully; Tres is easy to like, as are many of the other characters. Even the baddies are well-drawn, and have intriguing and complex motivations for their actions.

It’s vintage Riordan, to say the least. Not as funny as his books for children, but still quick-witted and engaging. It’s quite the homage to San Antonio; even though it’s rough and edgy, there’s an undercurrent of love and admiration for Riordan’s hometown. Probably most importantly, it’s brilliantly plotted (which is something that Riordan always does well); there’s enough information in the book to make the mystery solvable if you follow the clues (I didn’t call it!), but there’s also enough twists and turns to make the book exciting. Sure, it’s clunky in spots, but it’s also a page turner from the point a pipe bomb explodes into the first chapter until the final reveal at the end.

Which it to say: it’s Percy Jackson awesomeness for adults.

2 thoughts on “The Last King of Texas”