After I finished Belly Up, I wondered a bit about the guy, Stuart Gibbs, who wrote this incredibly funny story. And after it made our Middle Grade Cybils shortlist, I knew I needed to interview him. A few interesting bio tidbits first: he grew up in South Texas, was at one point one of the world’s experts on capybaras (the other two being the Kratt brothers?), and has written shows for TV and movies before venturing into the world of middle grade fiction. And if his first novel is any indication, I, at least, am glad he made the jump.

MF: This is your first novel, yes? Congrats! Can you tell us a little bit about the whole process?
SG: Yes, this is my first novel. I sold it by writing a pitch for Simon & Schuster: A synopsis of the story and the first few chapters. Originally, the story was told in third person, but my first editor at S&S suggested changing it to Teddy’s voice – and gave me a few suggestions as to what to concentrate on in the story. For example, he felt that the interplay between corporate hype and reality would be interesting to kids. I worked at a zoo when I was in college – and I studied biology – so I had a good background of knowledge to draw on. It took me about four months to write the book.

MF: Did you choose to write for middle grade audiences, or did that just “happen”? If you did choose it, why?
SG: It really just happened. I’d always thought about writing an adult novel, but had never given the idea of writing for middle grade any thought until my agent (Jennifer Joel) approached me about it. The moment she did, I realized that was exactly the audience I should be writing for. I had originally thought of Belly Up as a book for adults with an adult protagonist – but then realized the murder of an animal was the perfect crime for a kid to solve. Plus, I have young children, so the idea of writing something that they could read was exciting to me.

MF: How on earth did you come up with a hilariously outlandish idea like a murdered ornery hippo for a book?
SG: I worked at a zoo when I was in college and always knew a zoo was a great setting for a story. At some point, I realized I’d never heard of a murder mystery where the victim was an animal, so that seemed like a fun idea. But then, to create a good mystery, I needed an animal that a lot of people wanted dead. A hippo seemed like a great victim. They’re extremely dangerous and foul-tempered, yet most people seem to think of them as docile and harmless. Just the sort of animal that a corporation might mistakenly turn into their mascot and then regret doing so.

MF: Tell me about writing comedy: humor’s such a personal thing, how did you go about making sure it was funny?
SG: You’re right that humor is personal. Because of that, it’s hard to write something that will be funny to everyone. So I basically just wrote what was funny to me and hoped other people would enjoy it as well. I know that not everyone finds everything in Belly Up as funny as I do – but I’ve also had parents write to me saying that their children were laughing so hard reading the book that they fell off the couch, which is probably the greatest praise I could ever get. 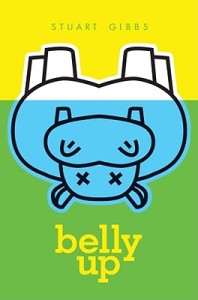 MF: The book has a strong (but not overpowering) environmental vibe: what are you hoping, if anything, your readers take away from reading this book?
SG: I certainly want kids to care about the environment, though I think that’s a message they get pounded with through various media these days, so I didn’t want to be overbearing with it. Hopefully, my readers are also learning that zoos are an extremely important part of the conservation movement. They’re not – as some people think – ‘jails’ for wild animals. At one point, I have Teddy voice a very personal thought of mine: That zoos are a compromise. There probably isn’t a zookeeper in the world who wishes we didn’t need zoos, but the fact is, without them, there might never have even been an environmental movement in the first place.

MF: Do you have a favorite character or scene in the book?
SG: I truly love Teddy, though I’m also very pleased with how Summer McCracken turned out. As for my favorite scene, well, it was a banner day when I came up with the sequence at Henry’s funeral. I think that one turned out to be quite funny.

MF: Oh, I agree: that was hilarious! You’ve also written for TV, correct? What are the differences and/or similarities between writing for TV and writing novels?
SG: They are extremely different experiences. Writing for TV is a much more collaborative process. You have producers, studio executives and network executives all giving you notes – and that’s just for the outline. By the time your show gets filmed (and there’s a good chance it won’t), the director, the actors and other writers have all weighed in too. Sometimes, this all works out great – and sometimes it doesn’t. When writing the novel, really the only other person with much input is your editor, so it’s much easier to stay true to your original vision.

Writing a novel is much more exacting work, however. In a book, every single word has to be just right, whereas, when you’re writing for TV, it doesn’t really matter how well you write a scene description; all that really matters is the dialogue.

MF: Are there five books you think everyone should read? (If there aren’t, what’s the last book you read and loved and why?)
SG: Wow. Five books. That’s very hard to narrow down. Can I pick my five favorite humor writers? These are the authors who’ve probably influenced my style the most – and the writers whose books I’ve read over and over again:

Roald Dahl made me laugh out loud all the time as a young reader.
Carl Hiaasen, Gregory McDonald and Donald Westlake are the funniest crime writers there are.
Bill Bryson writes nonfiction, but he does it in an amazingly accessible, incredibly funny way.

MF: Those are amazing writers. If you don’t mind telling us, what can we expect from you next?
SG: My next book, The Last Musketeer, will come out in the fall. It’s about a teenager who goes back in time to medieval France and ends up uniting the Three Musketeers – who are also teenagers — for their first adventure. This book is the first of a trilogy.

And in spring 2012, Spy School will be released. That’s about a kid who is thrilled to learn he’s been accepted to the CIA’s top secret Academy of Espionage – but then discovers he’s only been brought in as bait to catch a mole.

Plus, I’ve just developed the story for a sequel to Belly Up. So, hopefully I can get started on that sometime soon.

MF: Wow, things to look forward to! Thank you so much for your time, Stuart!

4 thoughts on “10 Questions for Stuart Gibbs”