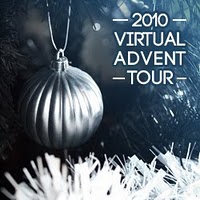 I haven’t thought to talk about our Christmas tree before, because usually we wait to put it up after A’s birthday. Which means, if I generally choose the first Sunday in December (and I do), then I don’t think about my tree as a viable advent calendar topic.

But this year, because my husband is off to Hong Kong, we put the tree up early. And I realized, that there’s a story I could tell.

This is our tree: 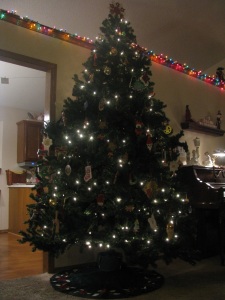 I don’t know if it shows, but my tree is not what you’d call elegant. Or put together. It’s a hand-me over, 9 feet tall, and leans slightly to the left; in fact, we’ve warned the kids that if they do too much bouncing around, the tree will fall over (we know this from experience). It’s not color coordinated, and I’m sure Martha Stewart would not approve. However, what my tree has going for it is that each ornament (or at least most) have a story behind them. I can tell you where we got each and every ornament and why it’s hanging on the tree. Okay, sure, I’m getting older, and some of the stories are a bit fuzzy. But it’s one of the things I like most about our tree: it’s got stories.

Let me tell you a few.

This one was the first one Hubby and I purchased, on our honeymoon to San Francisco. We saw it sitting in the gift shop of the San Francisco Botanical Gardens, and knew we had to get it. 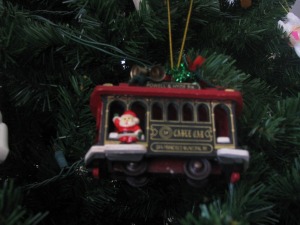 This one is another early one: I cross-stitched it because of Hubby’s love of cows. I think there should be more cows at Christmas, personally.

While we’re talking old ornaments, this is one of the oldest on the tree. It’s a shrinky dink, made in 1973, when I was one. I’m constantly amazed that it’s still in one piece (though the words “Merry Christmas 1973” on it are are fading). I do still love seeing it on the tree, though.

Another homemade one… if I had a chance and the money to collect anything, I would probably collect Santas/Father Christmases. I’m quite enamored with the whole mythology of Santa, and how he’s represented in different cultures. (There are a lot of Santas on our tree, in various forms, as a result.)

One of the other things we’ve done is get each one of the girls their own ornament for each year. We’re doing it so they have something to take with them when they move out, but, like everything else on the tree, they have their own stories, too.

This one of M’s we bought when we stopped over in Salt Lake City the Christmas of 2000. I was so excited by the stopover that I took her to see Ballet West’s Nutcracker, which happens to be my favorite. They had a gift shop, and so we had to pick out an ornament. She got the Sugar Plum Fairy. (We also have a Nutcracker ornament from the same place, but he was bought much earlier, and is a bit worse for the wear these days.)

This one of C’s was one that I painted (not well, but there it is) the Christmas she adored The Snowman. She was 20 months old, and it was her favorite movie and favorite book. We wanted to remember that. 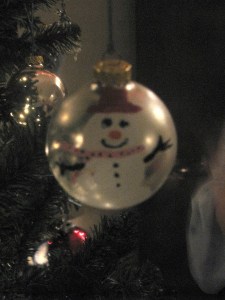 This one of A’s was a pair of baby shoes that her grandma sent her the year she was born. (She’s our December baby, if you haven’t figured that out yet.) They were much, much too nice to wear, so we tied the laces together and threw them on the tree. Perfect. 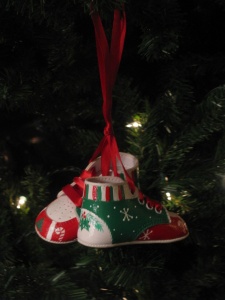 K, being the youngest, only has a few ornaments (she wanted to know why she didn’t have very many). This one we picked up at a craft fair in Coeur d’Alene a couple years back. It’s sculpted out of candle wax. I’m not sure she picked this design out; it may have been picked out for her. Still, the detail is amazing.

And being parents of school-aged children, there’s a handful of odd little school ornaments. Things they make in class, and then bring home to throw on the tree. The girls love seeing them as they come out of the box, and so I don’t have the heart to throw them away.

And finally, our tree wouldn’t be our tree without our fireman. He was sent to us by Hubby’s older sister, many years ago. I have no idea why she sent him, but we immediately fell in love: what tree shouldn’t have a guardian fireman? We stick him near the top so he can keep an eye on all the other ornaments, and protect the tree from any danger. 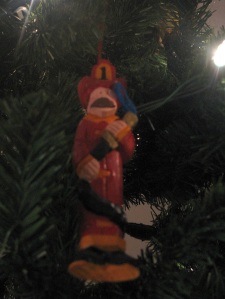 Be sure to check out the other stops on today’s tour: