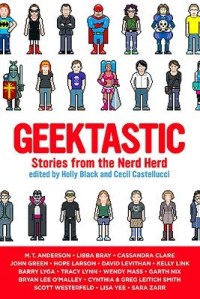 Stories from the Nerd Herd
edited by Holly Black and Cecil Castellucci
ages: 14+
First sentence: “I awake tangled up in scratchy sheets with my head pounding and the taste of cheap alcohol and Tabasco still in my mouth.”
Support your local independent bookstore: buy it there!

I was looking forward to this. I mean, it’s got stories from Scott Westerfeld, John Green, David Leviathan, Wendy Mass, Sarah Zarr and Lisa Yee. It has to be good right? I had heard rumors that it’s not all it’s cracked up to be, and yet I still held out hope.

But you know what? It’s not as good as it should have been.

It starts out with a bang: Holly Black and Cecil Castellucci combine for a wonderfully geeky story using cons and dressing up and the animosity (of sorts) between Star Trek and Star Wars. It’s a brilliantly fun story: engaging, entertaining, often hilarious. Perhaps they, as editors, should not have started off with that one, because it all went downhill from there.

Oh sure, there were some highlights in the mix: I particularly liked David Levithan’s quiz bowl geek story, Garth Nix’s live action role playing one, and Wendy Mass’s astronomy one. But, for the most part, they all seemed repetitive: take a geek (music, film, theater, dinosaurs, band) and let them fall in love. They all seemed, one way or another (notable exception being John Green’s and Sarah Zarr’s stories), to be about geeks falling in love. Which isn’t bad in itself: geeks fall in love as well as non-geeks, but it just seemed tiresome in story after story. I wanted something different after a while. Some other aspect of geekery. Something uniquely geeky, instead of just feeling like it was a normal story set in a geeky setting.

Not that I could have written one.

That said, I did like that they covered all aspects of geekery: there’s a story here for everyone. Multiplayer Online Games? Check. Majorettes in the marching band? Check. Theater geeks? Check. Rocky Horror Picture Show? Check. Buffy? Check. My favorite comic — the stories are interspersed with one-page comics — was “What Kind of Geek Are You?”. There are so many ways to be geeky, and it’s nice that the editors found a way to embrace them all.

And for that, Geektastic is truly fantastic. Perhaps it really is too much to expect it be fantastic in other ways, too.