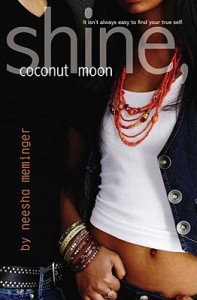 ages: 14+
First sentence: “There is a man wearing a turban ringing our doorbell.”
Support your local independent bookstore: buy it there!

One would expect, in the aftermath of 9/11, a lot more books dealing with the reactions of teens to that event. Perhaps there are a lot out there, but this one was the first one I’ve read that dealt with the attacks on the World Trade Center and the aftermath — not so much the aftermath of loss, but the aftermath of suspicion and racism that was pretty strong for a while (some would argue still is) immediately following the attacks.

Seventeen-year-old Samar — Sammy as her mom and friends call her — is Indian (her family hails from Punjab), but she doesn’t have any connection with her heritage at all. She was raised by a single mom — her father left when she was two — who has severed connections with her uber-strict Sikh family. Her mother has raised Sammy to be an “American” through and through; your typical white, middle class American, that is, with no real sense of her Indian heritage.

And then, the Saturday after 9/11, a turbaned man shows up at Sammy’s house. He turns out to be Sammy’s Uncle Sandeep — her mother’s younger brother — and he sets off a chain of events that lead to Sammy finally question the way her mother’s brought her up, and awakens a desire for her to learn about her heritage, the religion that goes along with that heritage, and her family.

It was an interesting book, taking the issues of assimilation, family and racism head on. Sometimes too head-on; I felt that it had a tendency to get a bit preachy and over-earnest in parts. But, even with that, it was a good story. Sammy’s journey to discover herself — and the conflict that is created by that– is an intriguing one. There’s quite a bit of material for discussion, as well: from the basic outline of Sikhism (and how to pronounce it!) to the knee-jerk reactions of people when it comes to racial stereotypes. It’s a thought-provoking book, which trumps all complaints of heavy-handedness and lack of compelling characters. Which is not something I found I minded.