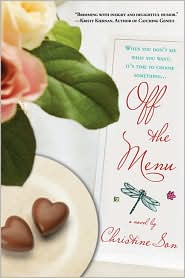 It’s not often I get a request to be a part of a book tour, and so when I got an email about this one, as part of the TLC book tours, I jumped at the chance.

The novel follows three Asian-American women — Whitney, Hercules and Audrey — two of which are children of immigrants (the other is an adopted child of rich, white parents). All three were valedictorians of the same high school, and have kept up their friendship (albeit a slightly competitive friendship) ever since. It’s an interesting look at women and friendships, Asians and achievement, and how friendships and dreams and parents all work together (or not).

I don’t think I went in with any expectations — good or bad — but I invariably compared it to the Amy Tan novels I read. (I’m sure that Son is going to get a lot of those comparisons…) And I didn’t find it lacking. In fact, while I didn’t get the same cultural feel that one gets from a Tan novel, I did find I could relate to the characters on a more visceral level. Sure, they’re younger than I am and Asian, but what woman (or man) doesn’t have problems with their parents sometimes? Or their friends? Or harbors secret dreams of doing something other than what society expects of her (or him)?

In addition, I liked the characters. Hercules is a vibrant character — brash and abrasive, yet lovable and approachable. She was my favorite, I think, because she worked so hard, and cared so much and yet was completely clueless as to how to show it. I think I liked Audrey the least — she’s brilliant, beautiful, rich, loving, with a totally supportive man… in short, completely perfect. Sure, her mom’s a total control freak, but that didn’t do enough to humanize her in my mind. In fact, when her dreams all worked out for her in the end, I just rolled my eyes. Whitney was somewhere in the middle — good, perfect even, but had enough challenges to make her seem less goddess-like than Audrey came off.

Son managed to balance the three perspectives quite nicely; I never felt like the story was choppy, or that any of the lesser characters were slighted for Whitney’s story (even if hers felt like the main one). My only real complaint is that I felt confused with the passage of time; the events of one chapter would unfold, and then the next would take place three weeks, or six months later. It would always take me a bit to catch up and figure out when everything was going on.

But that’s a minor quibble. On the whole, it was a good, interesting read.

2 thoughts on “Off the Menu”