The girls reminded me, when I picked this one up, that on a vacation we listened to one of the later books in this series. They enjoyed it, or at least they have memories of enjoying it. I remember this, vaguely, but had never actually read these. There’s not much to them: Encyclopedia Brown is presented a mystery — everything from a tent that the resident bully claims is his to missing roller skates — and then the reader is encouraged to solve it. I’ll be honest: I didn’t get a single one. I came close a few times, but never actually guessed the right answer. I went back and looked, and the clues were there. I’m just not a careful enough reader to catch them. Even so, it was a fun little read. 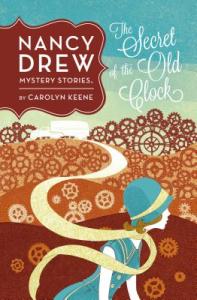 The Secret of the Old Clock
by Carolyn Keene
First sentence: “Nancy Drew, an attractive girl of eighteen, was driving home along a country road in her new, dark-blue convertible.”
Support your local independent bookstore: buy it there!
Content: There’s some scary moments, but nothing too intense. It’s in the Middle Grade Classics section of the bookstore.

I adored Nancy Drew when I was a kid. (Nancy Drew and Little House on the Prairie and Wrinkle in Time: those were the books I read and re-read.) I don’t know what it was about these books that drew me to them, whether it was Nancy as a character or just the mysteries and adventure I liked immersing myself in, but I have fond memories of reading these.

So I was a bit wary as I dipped back into the world of Nancy Drew as an adult (after nearly 40 years!). Would it hold up? Well… yes and no. The no is easier to handle: the writing is not only formulaic (which is to be expected, as it is written by committee, something I didn’t know as a kid) but also quite mundane. The thing that really stood out was how expressive Nancy’s eyes were: they sparkled and flashed and twinkled…. how many adjectives can they use to express her eyes and what purpose does it really serve? It wasn’t a mystery that a reader could get involved in; it wasn’t meant to be a puzzle that the reader could solve, but rather we were along for the ride, watching as Nancy got into scrapes and met people and was determined enough to find the solution. In this case, she accidentally stumbled upon a family dispute: Joseph Crowley died and was supposed to have left money to his relatives and friends, all of whom were less well off than he was, but it turned out that he left the money to this snobbish, well-off family in town instead. Everyone, Nancy found, was convinced that there was a newer will. But no one knew where it was.

The thing I did like about this was Nancy. Sure, she was a proper 1930s young lady: polite, kind to her elders, friendly and helpful. But, she was also smart, determined, and  unafraid to take chances. In this one, at least, she’s out there taking on bad guys and solving cases, and doing it by herself. (I know she picks up a boyfriend and a couple of friends later, but in this one, it’s just all Nancy.) Maybe that’s what I loved about these books as a kid: I wished I could be that determined and risk-taking, and I admired that about Nancy. I still do.

I don’t think I’ll revisit any of the others in the series, but I’m glad I reread this one.

One thought on “Two (Older) Mysteries”