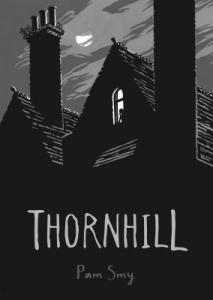 by Pam Smy
First sentence: “I knew it was too good to last.”
Support your local independent bookstore: buy it there!
Release date: August 29. 2017
Content: It’s creepy and the bullying gets intense. It’s in the Middle Grade (grades 3-5) section of the bookstore, but I’d be careful giving it to overly sensitive kids.

It’s 1982, and Mary is an orphan at Thornhill, in its final days. The orphans are being sent to other places, or place in foster homes. That is, except Mary — who has a form of selective mutism; she mostly can’t talk because of anxiety — and her nemesis, a girl we only know as “her” (I can’t remember ever reading a name, and as I went to find one, I couldn’t). Mary is bullied by her: psychologially, mostly, but also physically. But because she’s subtle about it, and because Mary is so terrified, she is never caught.

In a page taken from Brian Selznick’s books, Smy also tells a contemporary story, in which Ella and her father move into the house next to Thornhill, which has been closed for 30+ years, ever since a mysterious death of one of the orphans. Ella sees a girl in the window one night, and becomes obsessed with finding out who she is (Mary, of course!) and how she died.

This is a completely creepy book. Seriously. Not just the color palate; done in stark black and white, it adds to the sense of foreboding that is in the text. It’s got ghosts and dolls and psychological elements. It’s pretty intense. Which, if you like that sort of book, is a good thing.

One thought on “Thornhill”