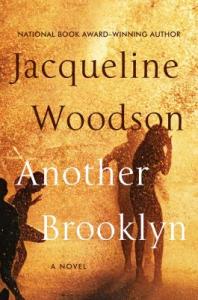 by Jacqueline Woodson
First sentence: “For a long time, my mother wasn’t dead yet.”
Support your local independent bookstore: buy it there!
Review copy provided by the publisher.
Release date: August 9, 2016
Content: There’s some swearing, including a few f-bombs, and a lot of illusions to off-screen sex as well as drug use. It will be in the adult fiction section of the bookstore.

The death of August’s father, and her return to Brooklyn for the first time in many years, sets off a chain of memories from her childhood. When she, her brother and father left the farm down South, soon after her mother committed suicide. The friendships she had with girls her age, and the different paths their lives eventually took. The way her father and brother turned to Islam and the hope and guidance their religion gave them. It all comes crashing down on her, in a series of reflective snippets, as she tries to make sense of her childhood.

I’m not sure I fully unpacked all that this novel had to offer. In fact, I know I didn’t. It’s deceptively short and it goes quick, and I know I missed things. Not only Big Things (not that there was much of a plot; it really was a series of short, almost poetic vignettes), but the Meaning behind those Things. It’s a harsh place, Brooklyn of the 1970s, a sexist one as well as a dangerous one. And August, through Woodson, tries to unpack what it all Means. And even though I enjoyed the lyrical flow of the book, and related to the women in it, I’m not sure I understood what Woodson was trying to do.

That said, I think it’s an Important book, and one that will be great for book groups to sit and hash over. (I’d love someone to talk to about it.) And, I can’t deny the beauty of the writing; Woodson is supremely talented. I just wish I were a better reader.

One thought on “Another Brooklyn”