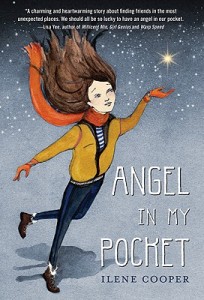 by Ilene Cooper
ages: 10+
First sentence: “There was a pile of money on Bette Miller’s kitchen table.”
Support your local independent bookstore: buy it there!

Bette Miller is dealing with her mother’s sudden death. (Yes, at the outset this is another one of those mother-is-dead books.) However, once Bette finds an angel coin in a charity jar, her life takes a turn. A neighbor moves in downstairs to help keep an eye on Bette, and gradually Bette finds that while life without her mother is sad, it’s still liveable.

But the story doesn’t end there: the coin gets passed to others: Joe Garcia, whose mother is often sick and who is struggling to find a place at the prestigious art school he (and Bette and the other characters) attends; and twins Andy and Vivi who have been growing apart in the year since Vivi’s asthma became really crippling both get a turn with the angel coin. And their lives are invariably changed, though in small and subtle ways, for the better.

I was kind of lukewarm on the book; on the one hand, I thought it handled the whole overused dead parent thing well. It wasn’t heavy handed, and the fact that the book branched out to deal with other kids and their problems helped as well. In fact, my favorite thing about the book was the way it transitioned between one kid and the next seamlessly. No jerky stops and starts, no ending of sections, announcing “here comes the next problem”. It was seamless and effortless.

But it was also kind of predictable. I knew, and perhaps this is the way the author wanted it, that having the angel coin would somehow 1) bring an angel into the life of the person who has the coin and 2) help them get over their problems. There weren’t any surprises in the process, and the book fell flat because of that. It would have helped if one could connect to the characters (and maybe some will), but they came off as one-dimensional and flat. It was also a little on the message-y side for my taste: be yourself, find joy in your life, and don’t sweat the small stuff. It’s not a bad message, but I would have liked it to be more about the characters and less about What They Learned.

But I’m nitpicking. It’s a sweet little story, one that I think kids will like.

One thought on “Angel in My Pocket”